What is a Window Schedule?

In this article we will explore window schedules in some detail, what they are and how to create one. 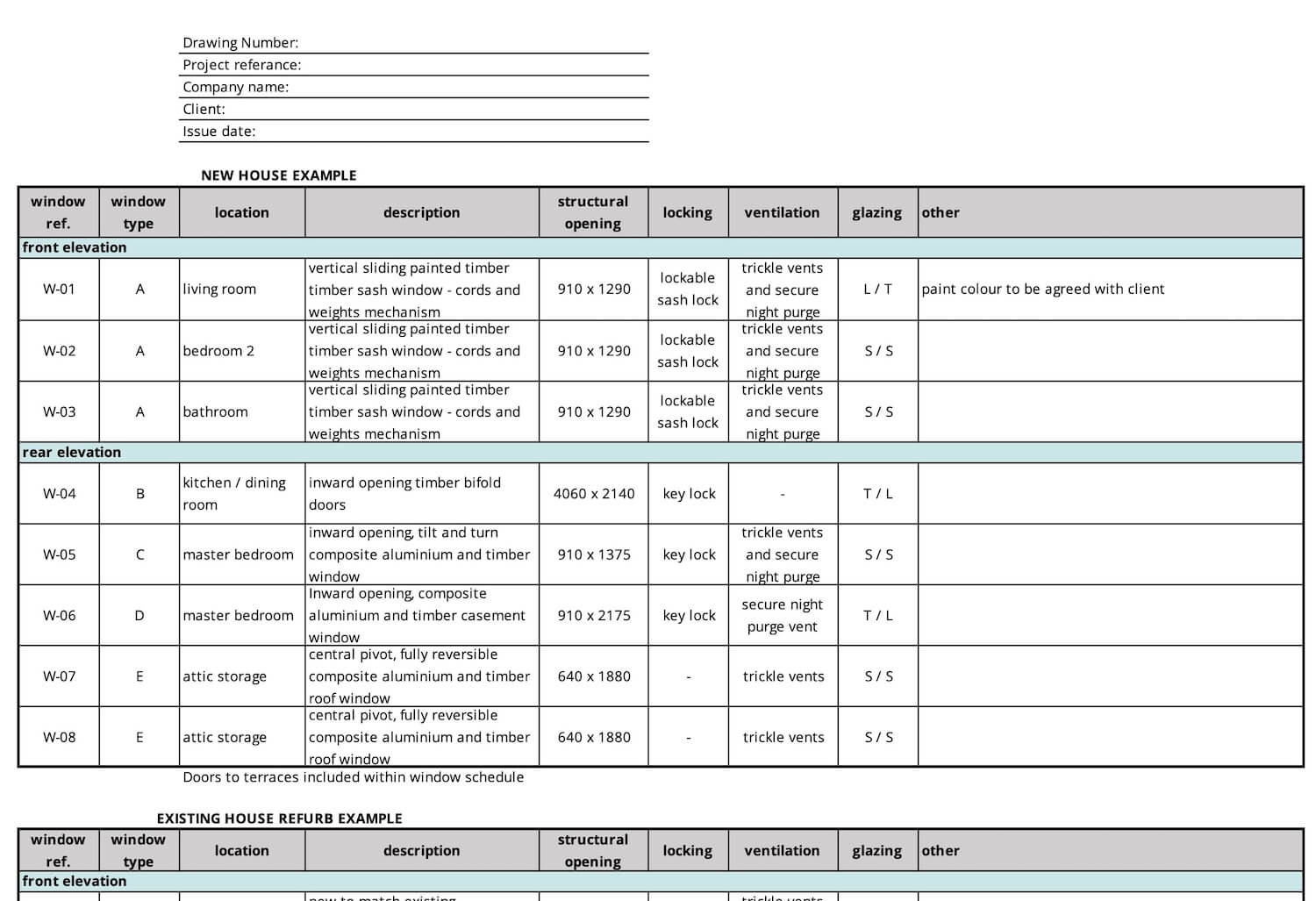 A window schedule can be key in communicating window specification between the architect, manufacturer and contractor and should be read along with other contract documentation such as specification information and general arrangement drawings.

Window schedules are a convenient way of presenting complex information about the different window sizes and types that are specified. This ensures full and useful information to the manufactures for pricing and fabrication, as well as accurate installation information.

Although the name implies that the schedule is for windows, it refers to any external doors and windows that contain large amounts of glazing such as those manufactured by a window supplier. Some examples include sliding, bi-fold and glazed patio doors or solid doors which are part of the window frame system. Solid doors such as front doors will usually be scheduled separately or with the internal door schedule.

When do I need a window schedule?

A full window schedule may not be required for small residential renovations where old windows are being replaced for new matching windows. In this case, the contractor, manufacturer or window supplier will normally come to the property, measure up the windows and provide a manufacturers quote and/or manufacturer’s drawings to confirm price and design prior to fabrication.

For more complicated designs, when new windows which do not match the existing are to be installed or a new residential building is designed, a written or graphic schedule can be used.

What needs to be included?

A graphic schedule can be a great way of communicating a number of things without having to transpose information into a spreadsheet. This can be done by simply using the proposed building elevations, adding some extra annotation and turning off all the irrelevant layers such as the facade. Some of this extra information can include glazing specification, opening of windows and heights from the FFL (finished floor level).

Where there are multiple of the same windows in your building, an extra drawing might also be useful such as a window type drawing. This allows you to add further detail of structural opening dimensions (s/o), frame dimensions and specification. It can also include window specific building regulation notes. 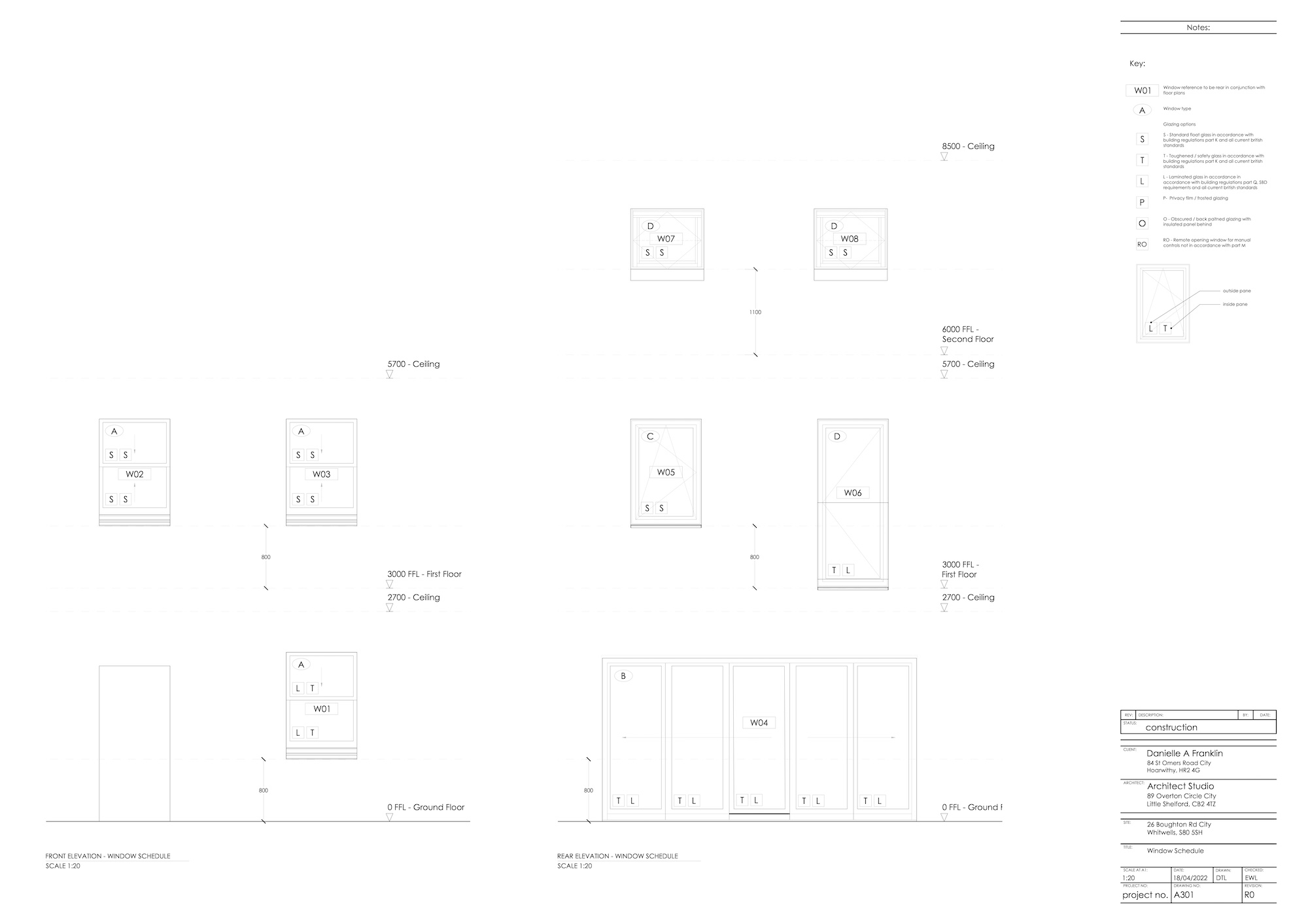 Whether you decide on a graphic schedule or a written one, below is some of the information to include:

Window reference – Windows in construction layout drawings should contain a reference code which should match up to that in the schedule.

Name – This could be as simple as the location of the window to differentiate it from other similar windows.

Opening type or direction – Such as inward, outward, etc.

Manufacturer – This can also include the product series or manufacturers reference.

Structural opening – This lets the builder know the dimensions to create the opening for the window. Each window frame will require an installation tolerance between the structure and frame, this information is usually provided by the manufacturer and is dependent on the structural material, the window frame material, size and design.

Size of window (width, height, thickness) – These are usually the structural opening dimensions minus the installation tolerance.

Material – Window frames will normally be made from timber, aluminium or PVC. Many modern windows can also be mixed timber and aluminium.

Glazing specification – This is especially important if there are critical areas of glazing.

Weight – This may be a requirement if there are large panels of glazing which are too heavy to be installed by hand and require craning.

Acoustic rating – In urban areas or for houses near busy roads, a planning requirement may require windows to have an acoustic rating. However, this may also be a nice addition for acoustic comfort.

Most modern windows are specified as double or triple glazing. This means each window will have two or three window panes and can be specified the same or different depending on location.

This is the most common type of glazing.

Laminated glass is a safety glass which is created with an internal film between two layers of tempered glass. When struck, the glass will remain adhered to the film, preventing the glass from falling through the frame.

This glass is typically used on the external pane of ground floor windows to increase security and prevent someone entering the building through the window.

It is also used internally, for glazing which falls below the 800mm guarding height to avoid the risk of falling if broken or where the risk of glazing being struck is high, just as full height doors leading to a terrace.

Toughened glass is a type of safety glass which when broken crumbles into small granular chunks instead of splintering into jagged shards.

This type of glazing is used in areas which may be liable to knocks from users such as doors onto a terrace area, but where there is no risk of falling. Other applications include small areas of glazing on timber doors and shower doors.

When designing windows on a boundary where privacy is a planning requirement or bathrooms to private rooms such as bathrooms, different types of glazing can be used.

Frosted glazing has one of the panels of glazing which is permanently frosted, usually kept internal to the air barrier so the glass on both external sides is flat to the touch and easy to clean.

Privacy film can be applied after the window manufacture to create a non-permanent frosting which can be removed by the user. This option may not be possible in areas where a planning requirement requires frosted glazing.

O – Obscured / back painted glazing with insulated panel behind

Obscured or back painted glazing is usually used in window panel systems in areas where visibility is not wanted, such as window panels in front of kitchen counters or bathrooms. This is used more commonly in large facades with repetitive windows rather than on single family homes.

When producing a drawn window schedule, in the UK, windows should be drawn as on the external elevations with the arrow pointing to the location of the handle. In the US the arrow points to the side that is hinged.

Below is a series of drawings showing some of the most common types of window openings, and how to show them in elevation. 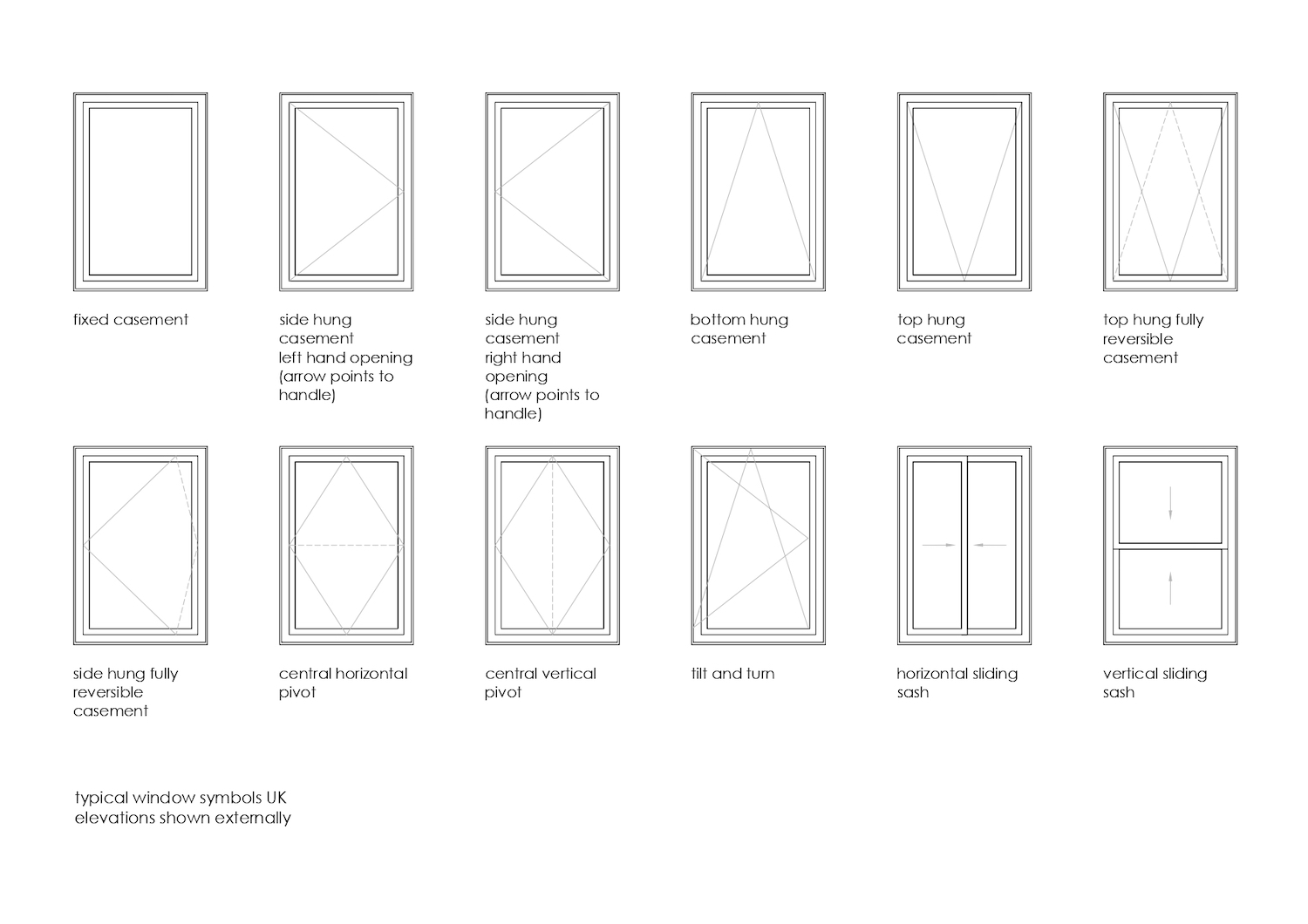 We have put together a handy selection of Window Schedule resources for all our members to download.

Not a member? Sign up now to get access to this schedule, plus lots of other really useful resources! 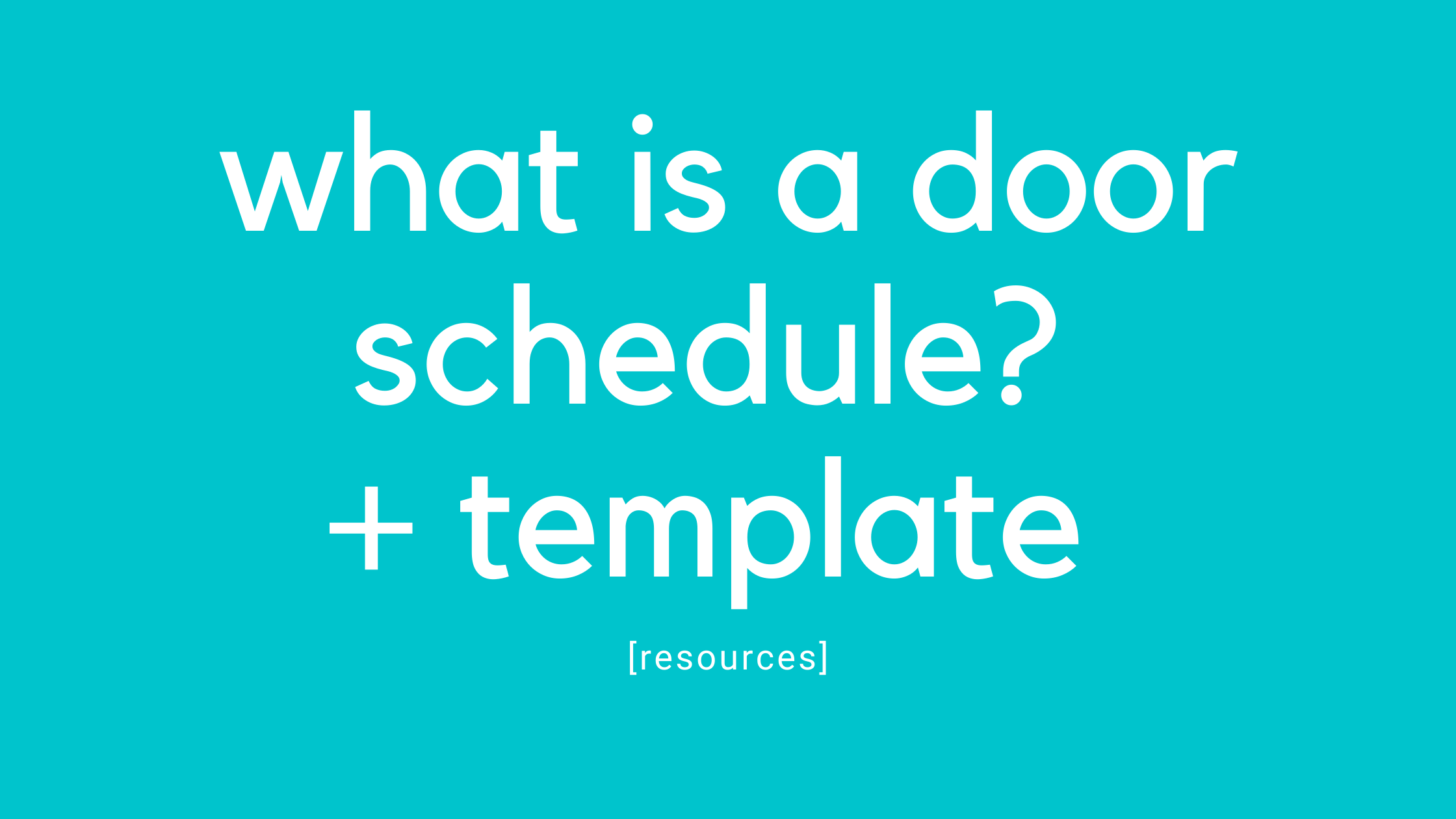 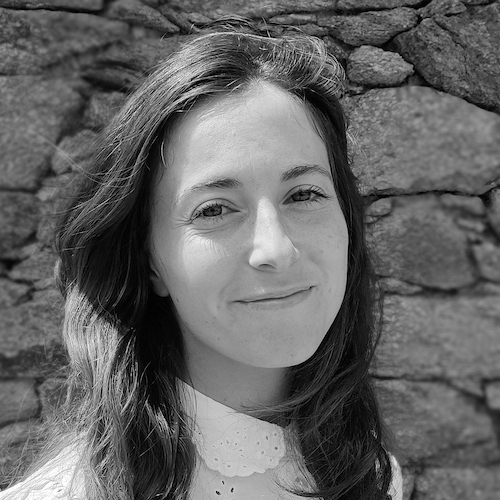 Written by Aida Rodriguez-Vega, architect and researcher. At the Detail Library, Aida keeps busy by carrying out technical research and drawing new details for the ever-growing library.

This website uses cookies to improve your experience while you navigate through the website. Out of these, the cookies that are categorized as necessary are stored on your browser as they are essential for the working of basic functionalities of the website. We also use third-party cookies that help us analyze and understand how you use this website. These cookies will be stored in your browser only with your consent. You also have the option to opt-out of these cookies. But opting out of some of these cookies may affect your browsing experience.
Necessary Always Enabled
Necessary cookies are absolutely essential for the website to function properly. These cookies ensure basic functionalities and security features of the website, anonymously.
Functional
Functional cookies help to perform certain functionalities like sharing the content of the website on social media platforms, collect feedbacks, and other third-party features.
Performance
Performance cookies are used to understand and analyze the key performance indexes of the website which helps in delivering a better user experience for the visitors.
Analytics
Analytical cookies are used to understand how visitors interact with the website. These cookies help provide information on metrics the number of visitors, bounce rate, traffic source, etc.
Advertisement
Advertisement cookies are used to provide visitors with relevant ads and marketing campaigns. These cookies track visitors across websites and collect information to provide customized ads.
Others
Other uncategorized cookies are those that are being analyzed and have not been classified into a category as yet.
SAVE & ACCEPT